“That Age Is Over Now” 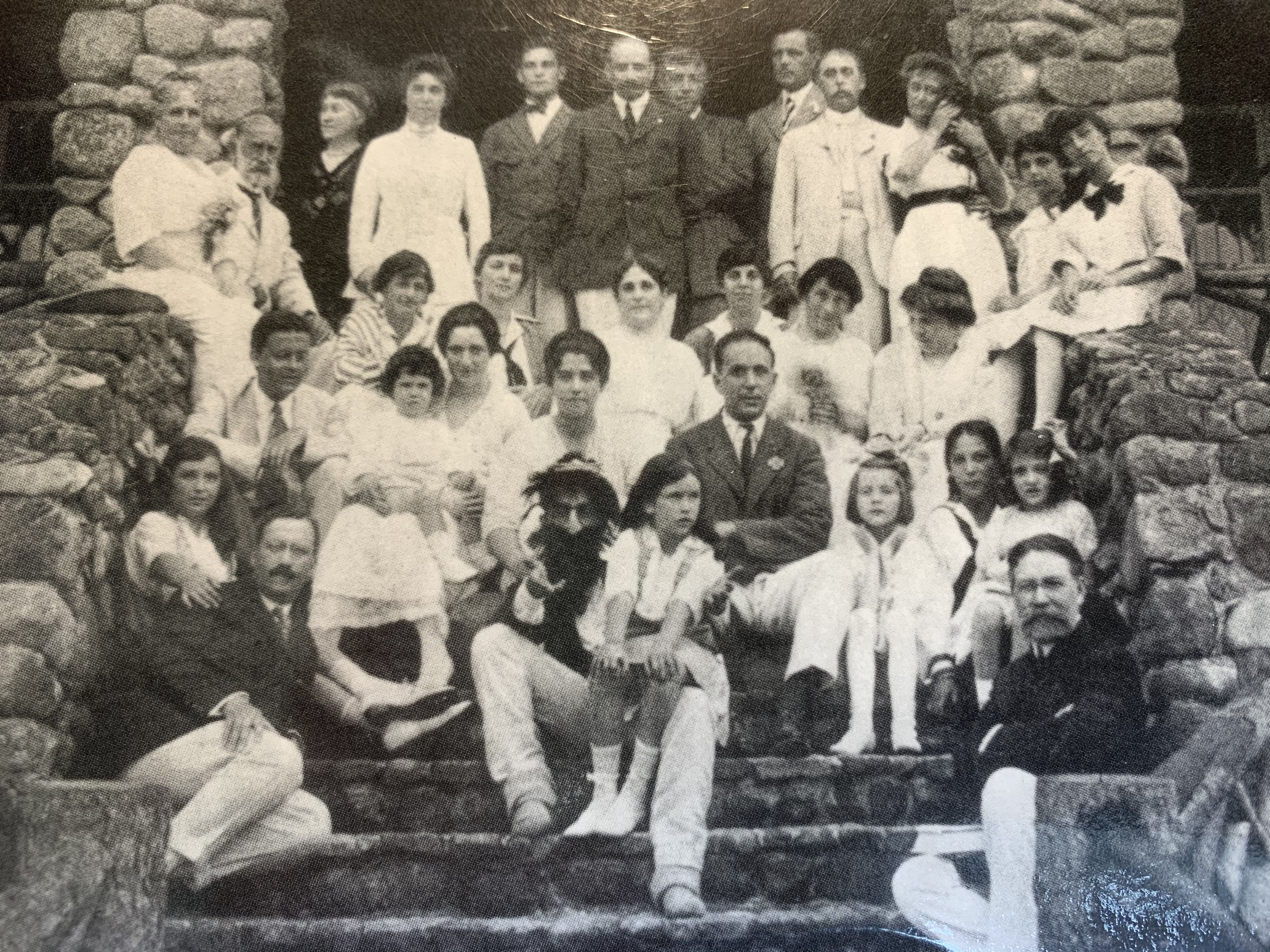 Edna Hellman (Grandy) is seated on the top row of the steps, third in from the right, in 1915. Photograph from “Our Crowd”: The Great Jewish Families of New York, Stephen Birmingham, Syracuse University Press edition, 1967.

I have fleeting, but specific, memories of my great-grandmother, Edna Hellman, or “Grandy,” as my father and everyone else called her. She lived from 1884 to 1982 in New York City, born on 61st Street between Park and Lexington Avenues when the streets were still made of cobblestones. She lived a privileged life, that is certain, raised among the German-Jewish crowd who established themselves with ingenuity and eventual prosperity on Wall Street in the mid-nineteenth century.

There’s a photograph of a close group of them at Isaac and Guta Seligman’s Andirondack camp, taken in 1915. Grandy, at thirty-one, sits on the top step, while her youngest daughter, Peggy, balances on the knee of an unidentified family member at center. I’ve seen that photograph many times over the years, but only in the last five did I notice the man on whose lap my great-aunt Peggy is sitting: he is wearing a mask. How did I not see this before? And the obvious tease he is making of a Jewish stereotype, his hand outstretched toward the camera? The more research I’ve done on the Hellmans, the Seligmans, and others, the more I’ve learned about what that privilege cost them. They lived great lives with many luxuries, they built a close-knit, vibrant, philanthropic community, but they were for decades discriminated against by the city’s gentile banking class, the Astor “400.” The more we learn about certain groups of people, the more we see the inner disparities. The more we learn, the more we see.

Another thought came to me as I was re-listening to the recording my father made of Grandy talking about her life in 1979. In this particular excerpt (link below), Grandy speaks to how she was raised as a girl at the turn of the century, and what it was like then as a young woman, wife, and mother. She was never expected to go to college—only a few of her friends were “college girls”—and she was given a “pat on the back” whenever she inquired about finances or the family business. She was treated like a “moron,” she says. In fact, words like moron and stupid come up in this excerpt quite a lot, when Grandy is talking about herself and her friends, the women of her generation. I couldn’t help but hear the self-incrimination in these words, the self-hatred even. It was as if she was calling herself stupid, a moron—as if she had internalized the way she was raised to the point of truly believing it.

There are many, many more stories about Grandy that I will share at another time. The photograph of her sitting and chatting it up with a young groomsman at my mother and father’s wedding in 1969 (when she was eighty-five years old) captures her spirit perfectly; she was a force in any room (or in this case, outside on a lawn), the absolute opposite of shy. But what this recording captures is something all women today must think about, and perhaps now especially as we head toward the 100th anniversary of the 19th Amendment in August. Listening to the self-hatred in my great-grandmother’s voice makes me wonder whether that age really is over, whether women truly have gotten rid of that inner voice that tells them that they are less smart, less equipped. The more we all learn, the more we all see. I hope.