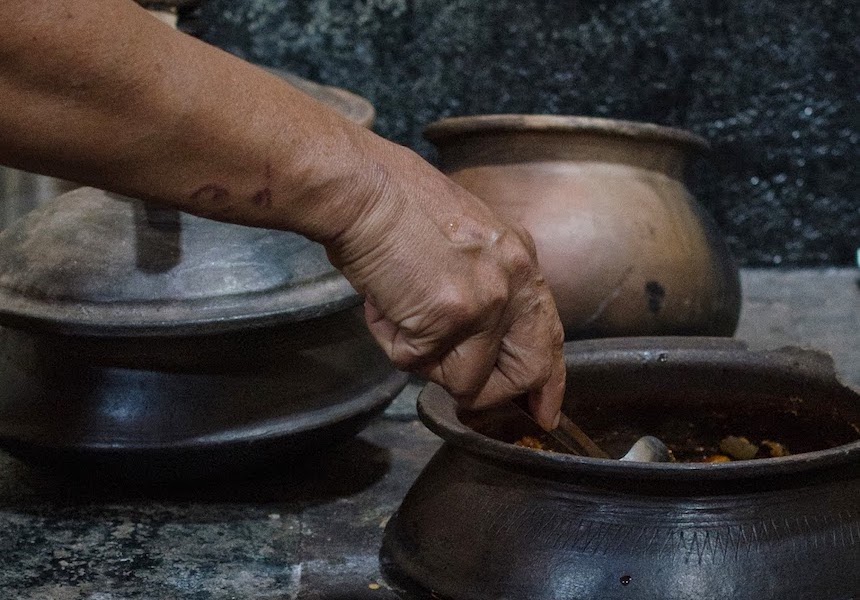 This story originally appeared in April 2015 on The Tiffin Box, the author’s website offering writing about Indian food, recipes, and memory.

It was mid-morning late in January, just over five years ago. Adz and I were visiting India, before our big move to Canada from England. I was lying on the bed next to my maternal grandmother, Mai. Perhaps, I was flipping through a magazine or a book of some sort. I was also wearing one of Mai’s housecoats—it smelt faintly of her talcum powder, and the soap she used—as it was too hot to wear anything else.

Adz, then two, was sitting at our feet, chattering away, playing happily with Mai’s rosary, the warm wooden beads worn smooth from all those years of her fingers caressing them in prayer. The sun filtered its rays through the ancient wooden shutters, warming the room. When the heat got unbearable, I got up and turned on the ceiling fan. The whirling, rattling sound was hypnotic, as I lay back next to Mai, dozing off and on.

Mai was talking. I was only half listening.

“... and you were a saitan, devil of a child,” I heard her say, with amusement. “You decided that the best time to go and pull on the cow’s horns was when I was milking her. She kicked at me, and the half-filled pail was knocked over. Before I could come around and grab you, you’d disappeared. Even at that age you had a fine sense of drama. Probably ran and hid behind your grandfather, who was always too indulgent of you. Luckily for you, I had to go and finish milking that cow, otherwise you’d have had a smack on that fat bottom of yours. I finished milking, and came around to the kitchen with that pail of steaming milk, and there you were, innocent look and all, standing there with your little kutte (small mug), looking up at me hopefully with your big big eyes. I couldn’t stay angry with you. So I filled your kutte up with milk and you drank it all in one go, like we were starving you. After that you grabbed all the cooking pots from my shelves and decided to bang them together.”

Surprisingly, I actually remember that incident with the poor cow, though I must have been pretty young. I smiled at Mai lazily, and noticed that her eyes were closed. She was falling asleep, so I grabbed Adz and we headed out into the courtyard of my grandparents’ home for a rousing game of chase-the-kittens. My cousins Hemma and Blaise joined us, and we hung around chattering away.

It was also possibly the last real conversation I had with Mai. 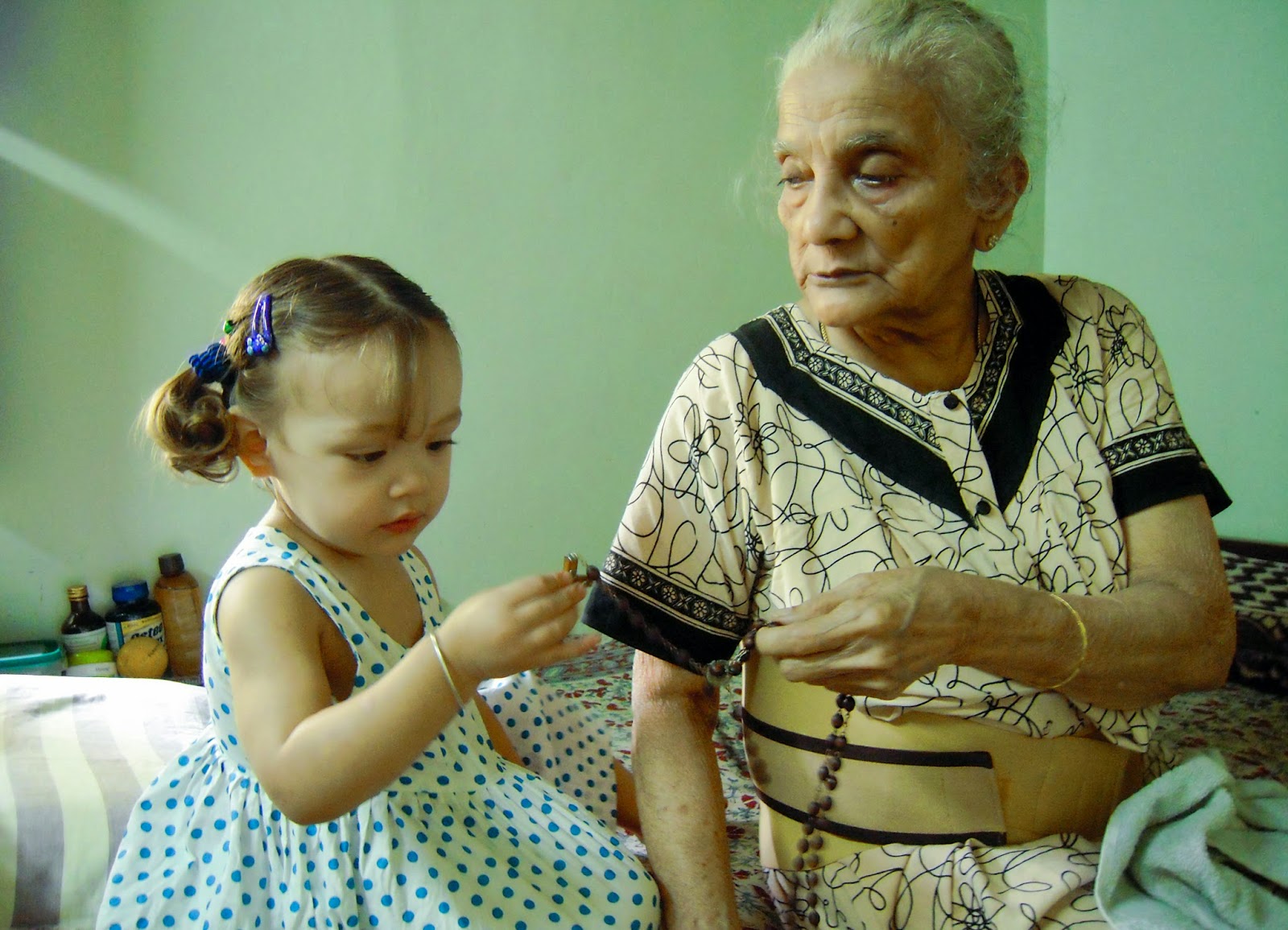 I grew up with my Aba and Mai. My mom had a difficult second pregnancy, so I spent most of my early life with them. I adored my grandfather, and used to follow him everywhere as a child. Aba was a huge influence in my life. But, looking back, it was my Mai who would shape my life more than I ever realized. She was an incredibly hard-working, patient woman, and looked after all of us with the kind of selfless devotion that is very rare in today’s world.

My Aba came to see me off at the airport when I moved to England almost a decade and half ago. I knew then that it was probably the last time I would see him, and he waved me off with a devache besawn putha (“god bless you, son”). I thought he might still have a few more years in him, but less than six months later he passed away. The grief was strong, but it was tempered with the knowledge that I couldn't put my life on hold waiting for him to die. He wouldn't have wanted that. I was lucky to have grandparents. But for whatever reason, I thought my Mai would live forever, and I couldn't imagine her passing away.

I was counting down the days when I could get back to India, after an absence of almost four years. I excitedly told Adz all about my life with Mai and Aba, and how this time she would remember her great-grandmother.

I was devastated. My husband told me it wasn’t about me, or what I wanted. Mai had been ill for a long time. She was blind, and her hearing was almost gone. She couldn’t move from the bed, and all she wanted was a peaceful death. Kay reminded me of this, how being bedridden was like a jail sentence for my incredibly active Mai. But the devastation and anger remained. I’d finally figured out what I wanted to do with my life and I had so much to ask Mai, to tell her, to get her recipes and her life story. I was ready to listen to her this time, not half halfheartedly like I had in the past, but with purpose. And now I couldn’t. Adz was two when she last saw Mai, and she doesn't remember her, unless I show her pictures and videos. I couldn’t introduce Adz to Mai, and have Adz remember her this time around.

I couldn’t cry for Mai. Her passing felt like a betrayal, like she should have waited for me before she went. Just three more months. But she didn’t. 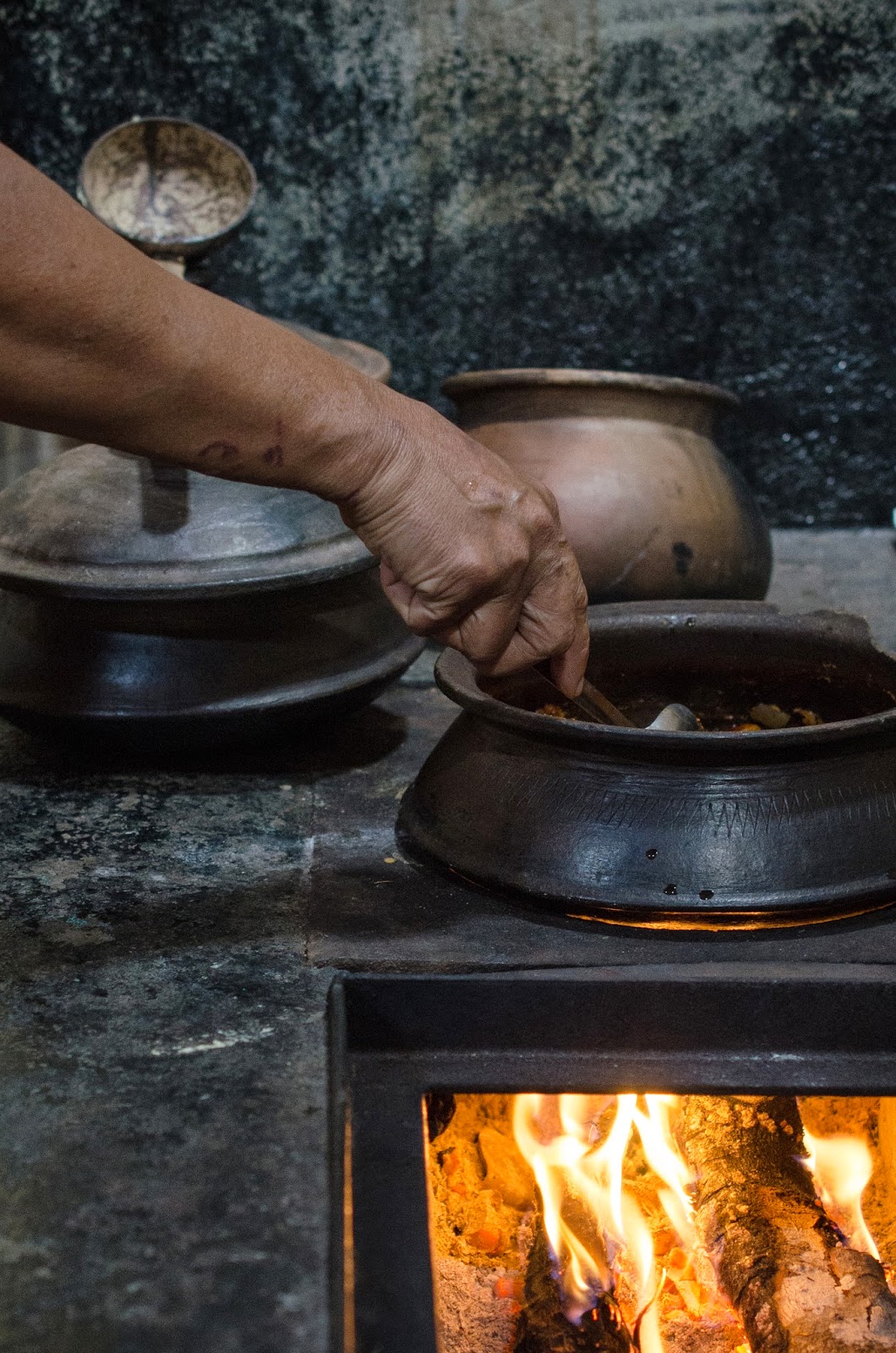 When I went back to India, it was Christmas time. We had a subdued Christmas in memory of Mai. Adz and I then went back to my grandparent’ house in Karkal in time for the big three-day church festival that Attur, my grandparents’ village, is famous for. It was lonely without Mai. My aunt Justine and cousin Joy were down with colds, so my other cousin Hemma and I morosely hung around the house, and after a while, I took Adz to a few places around the house and the woods behind it, where my sister and I played when we were little. I wanted to get away from the silence.

That evening was the night of the church festival. When my grandparents were alive, it was a time of merriment and joy. Mai and Aba were busy all day and evening, and the cooking went late into the night. Spices were pounded, onions, chillies, garlic and ginger were chopped in industrial quantities. Masalas were made, sannas were steamed and clay pots sizzled on wood fires, filled with aromas of cooking meats and vegetables. We all hung around the house, waiting for the cooking to be done, and around midnight we would fill our steel plates full of steaming boti and dukra maas and chicken curry, all soaked up with soft, steaming sannas. Mai would ask me to check the salt in the dishes, and I would tell her if the curry needed more salt or vinegar. The loudspeaker in the church in the valley was loud and played devotional music all night, and the steep way to the house was lighted with precariously placed fluorescent tube lights, to guide late night visitors. We went to bed late, almost too wound up to sleep, with all the excitement floating around us.

This time, it was too quiet. There were no late-night guests, and the music that blared over the loudspeakers felt out of place. The gorgeously lit up church seemed vulgar and all I wanted was my Mai, and the excitement of the feast back. That was when my cousin Hemma and I decided that we would make Mai’s famous boti, late at night, in memory of her.

My aunt had already sourced and boiled the offal, so Hemma and I painstakingly chopped it all up into tiny dice. I chopped onions and aromatics, and we both toasted spices for the bafat masala that would go into the dish. We ground up our spice mix, and I started the curry, placing it all in clay pots over the old wood fired stove. I sent Hemma out to the garden with a flashlight for fresh bay leaves, as we simmered and seasoned the boti. As it slow cooked, we chopped vegetables, made rice and dal and started steaming sannas. I toasted coconut to add to the boti once it finished cooking. … 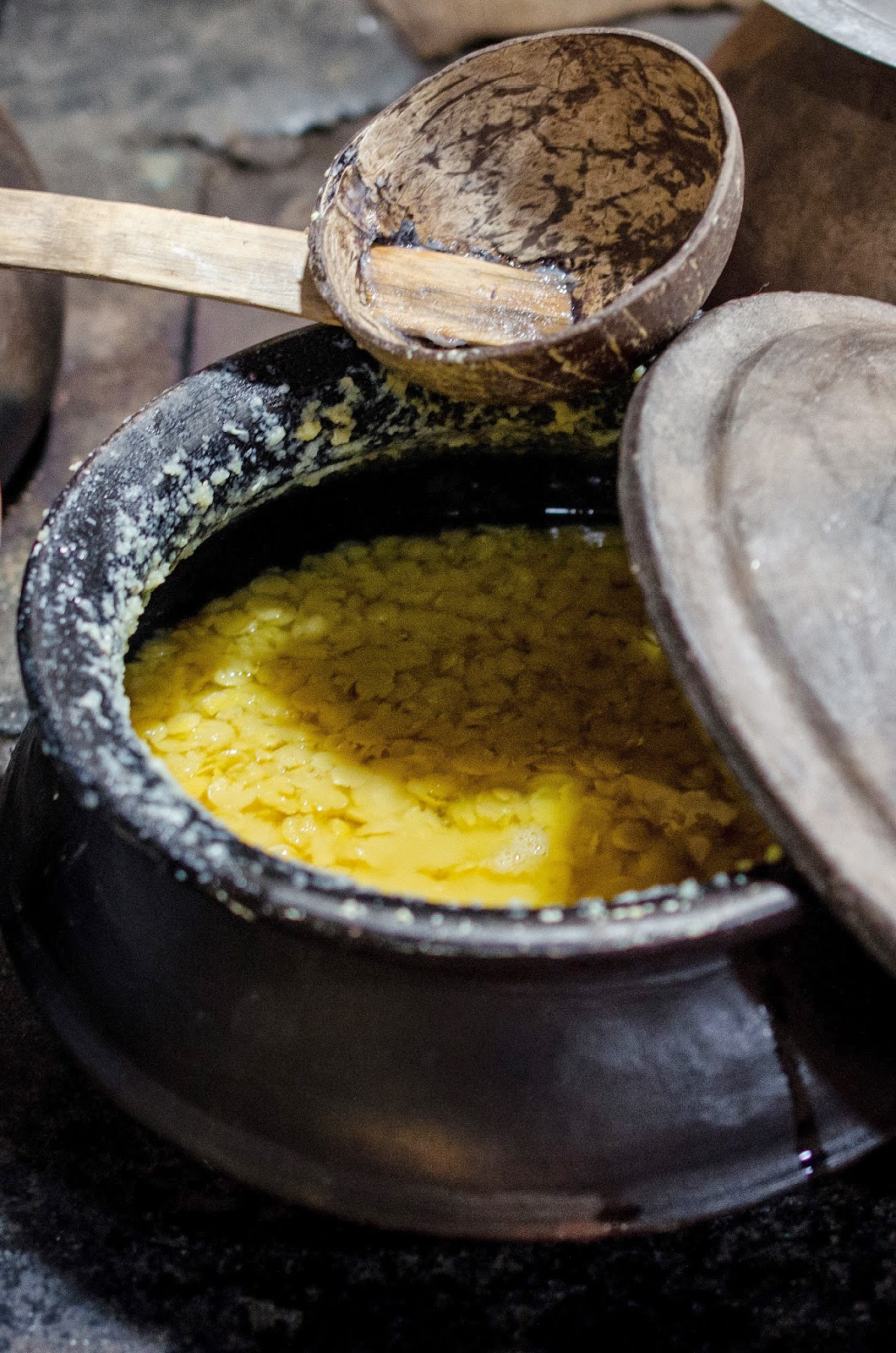 When we finished, Hemma and I sat down and slowly ate the boti, with sannas, dal, vegetables and pickles. The boti didn’t taste like the one my Mai made, but it was close. Aunt Justine reckoned it should have been spicier, as we sat down and reminisced about all the feasts we spent together as a family.

I crawled into bed with Adz at around half past twelve. As I cuddled my baby girl, I felt the presence of Mai all around me, and for the first time since she passed away, I started to cry. I cried for her and my Aba, I cried for me, and I cried for Adz, who wouldn’t really know these two amazing people at all, people who basically brought me up to be the person I am. I felt the incredible hole that was left by my Mai’s passing. I felt so much regret at the time I wasted being selfish and not wanting to spend time with them. I missed her soft, lilting voice, as she told me stories of when I was a child and staying with them. I took so much about her for granted. But cooking her favorite meal, in her own kitchen, finally gave me the closure I needed to move on.

I finally let my Mai go. Rest in peace, Mai. I miss you so much, and I will never stop missing you. 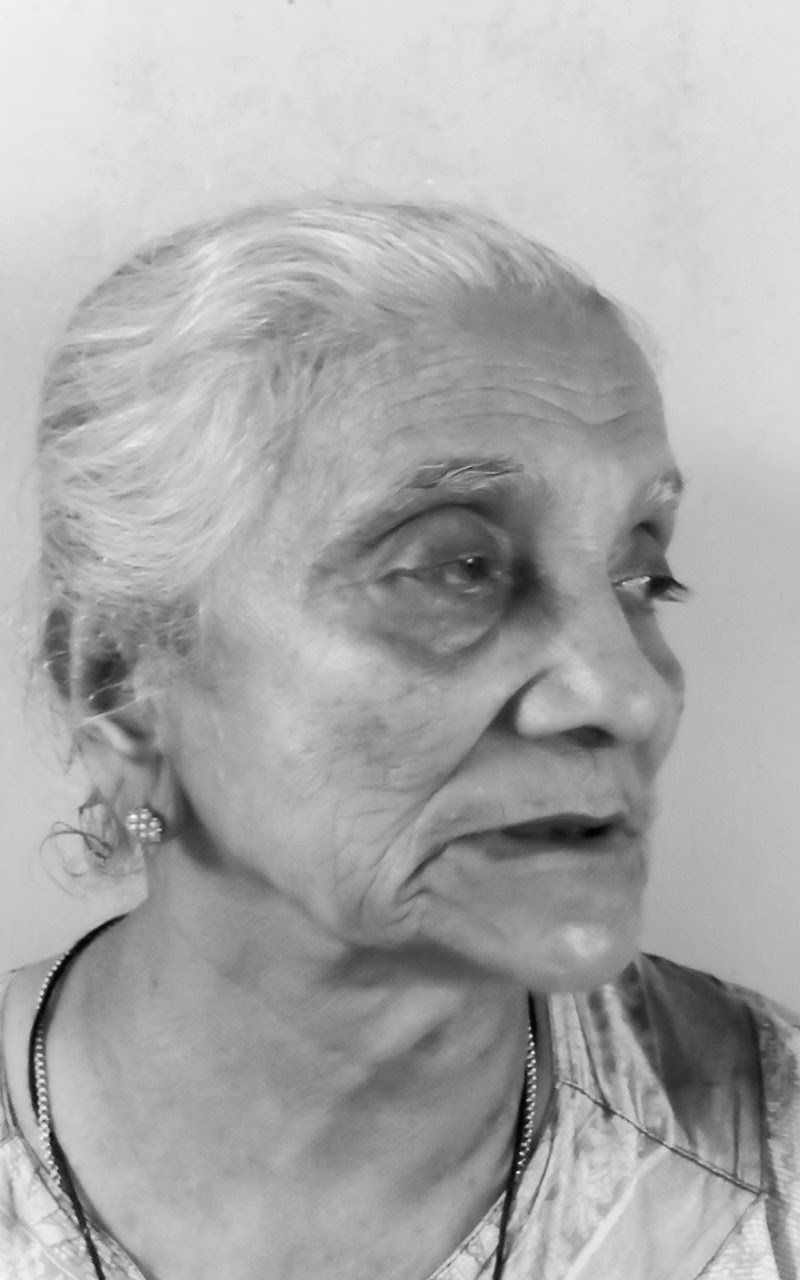 Michelle Peters-Jones is the creator of The Tiffin Box, a food, recipe, and review website based in Edmonton, AB, Canada. Peters-Jones creates original recipes, as well as recipes inspired by her family. She writes about East Indian, British, and Canadian food, with a strong focus on using fresh, local, and sustainable ingredients.