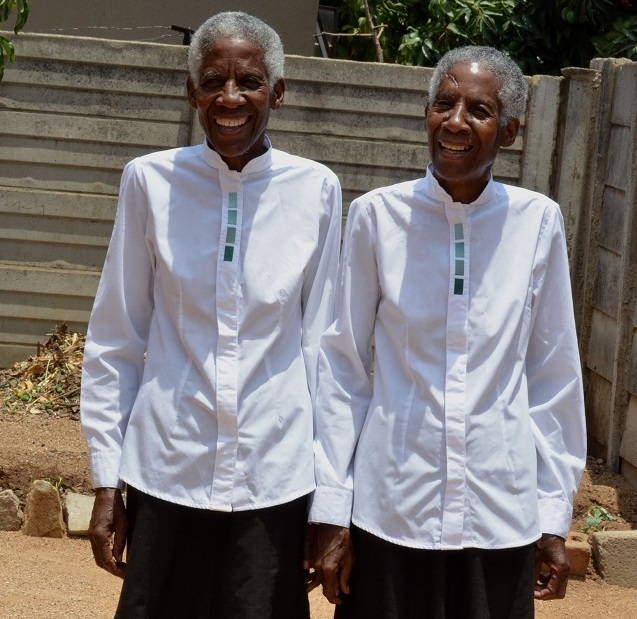 (This piece was originally published as “Twin Grannies on Life Experiences,” by Nozibelo Maphosa, in The Sunday News, Zimbabwe, sundaynews.co.zw, Nov. 6, 2016.)

It is common and even cute for toddler twin siblings, mostly identical and of the same sex, to dress in matching outfits, act alike and inseparable, often confusing people with their many likenesses.

However, for most twins, as they grow older those tendencies fall away, whether by choice or circumstance, as each one starts to find his or her own identity and likes. But for 64-year-old Entumbane identical twin sisters, it has not been the case.

They have become the talk of their neighborhood and an enigma of a sort, particularly to those visiting the high-density suburb for the first time.

Ms. Jesta and Violet Mabaisa may have set themselves as a rare pair and they don’t seem perturbed by the attention they have received over the years. They may not be the country’s oldest twin grannies, but perhaps the oddest as they have failed to outgrow their kindergarten tendencies.

The twin grannies, who have never been married, have been staying in Entumbane since 1981 and look set to continue living together until death does them part.

Sunday News caught up with the Golden Girls, as the grannies have become known in their neighborhood. During the interview the pair would sometimes chorus responses to questions, as if to illustrate the telepathy that has grown between them over the past 64 years. The Golden Girls revealed that at one point they even considered sharing a name.

“We at some point thought of changing both our names and using one name. We had that idea for a long time but somehow we got tired of it and didn’t pursue it,” said Jesta.

Violet quickly interjected, “It would have been beautiful if we had pursued it, but it was going to confuse people more. Right now most people can’t distinguish us, it would have been worse if we shared a name,” she said.

But who is the older of the two?

“Our parents said Violet is the older one, though we don’t know if that is true. We have always been together since birth and hope to die like that. We share everything, and now consider each other best friends. We went together to school, and left school in Standard Six. We were good at school, netball, and singing,” said Jesta.

The Golden Girls have never been married but have two children each. Jesta had her first child in 1976 and Violet, as she said, felt left behind and had hers the following year. Asked if they had ever considered marriage, the twins responded simultaneously, saying they chose to stay unmarried because marriage would have messed up their relationship.

“I believe if we were ever going to be married it would have to be to twin brothers because they would understand the bond which we have. If that had failed we would have married a single man to take care of both of us but that did not happen,” said Violet, as Jesta chuckled in apparent approval.

The two grannies said they used to stay in two semi-detached houses next to each other, but decided to move into one house and lease out the other.

“We used to rent a house in Mpopoma together and in 1981, we bought these houses and we made a request that the houses be joined, which was not a problem since here the houses are semi-detached. In our houses, we had identical furniture. Jesta stayed in number 33006, and I stayed in house number 33007,” said Violet.

The twins got used to the idea of doing things together from childhood and have to this day maintained that lifestyle.

The women reminisced about the time one of them had to go and work outside the country and how their relationship was affected when they were apart.

“That was the toughest phase in our lives, but we had no option because she had to work for the family. She came back home every month to see us and the children. At that time I wasn’t working so she was taking care of both families. Now I am the only one who is working,” said Jesta.

In spite of their striking similarities, the twins have some physical differences. Violet is slightly taller than Jesta and their shoe sizes are different.

“I think we have grown to be closer than before, we think alike, it just comes naturally. We share the same bed, we still buy similar clothes and even wear similar underwear... We are one of the few pairs of twins who still do this. Twins tend to stop doing things together and wearing similar clothes as they grow. We have never fought and we will never do. Nothing will separate us.”

The twin grannies have their biggest fear.

“We are afraid of what will happen if one of us dies. I can never imagine life without my other half. This is the longest love term there is. Till death do us part,” said Violet.

A neighbor of the twins, Ms. Sikhangezile Sibanda, testified that she had never seen the two wearing different types of clothes.

“I can tell you that even in the morning they will be dressed identically. I personally have never seen them dressed differently in the twenty years that I have stayed here,” said Ms. Sibanda.

Could the Golden Girls be on a route to become the world’s oldest inseparable twins? Only time will tell. 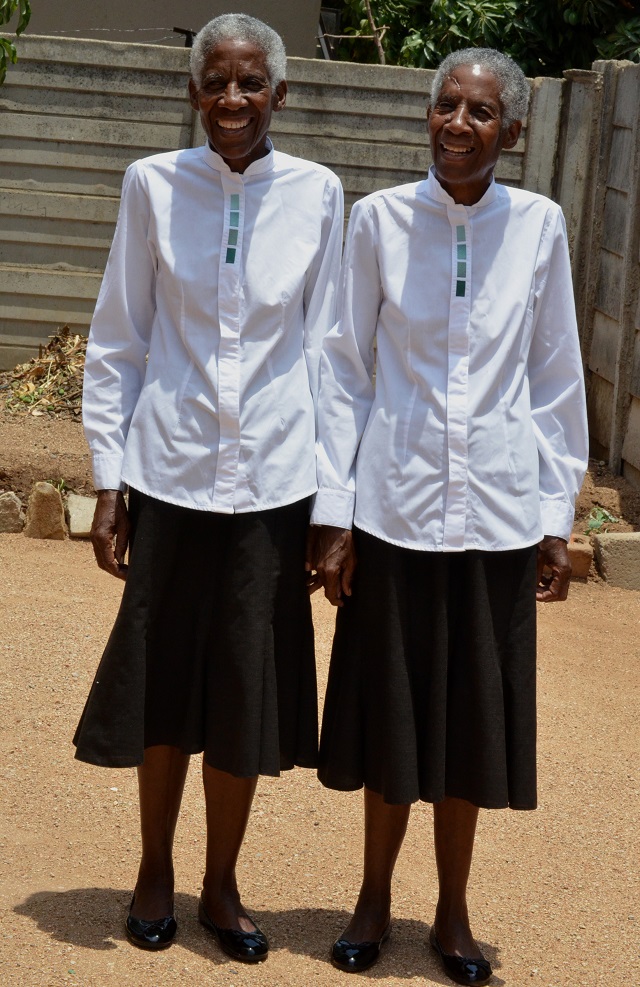