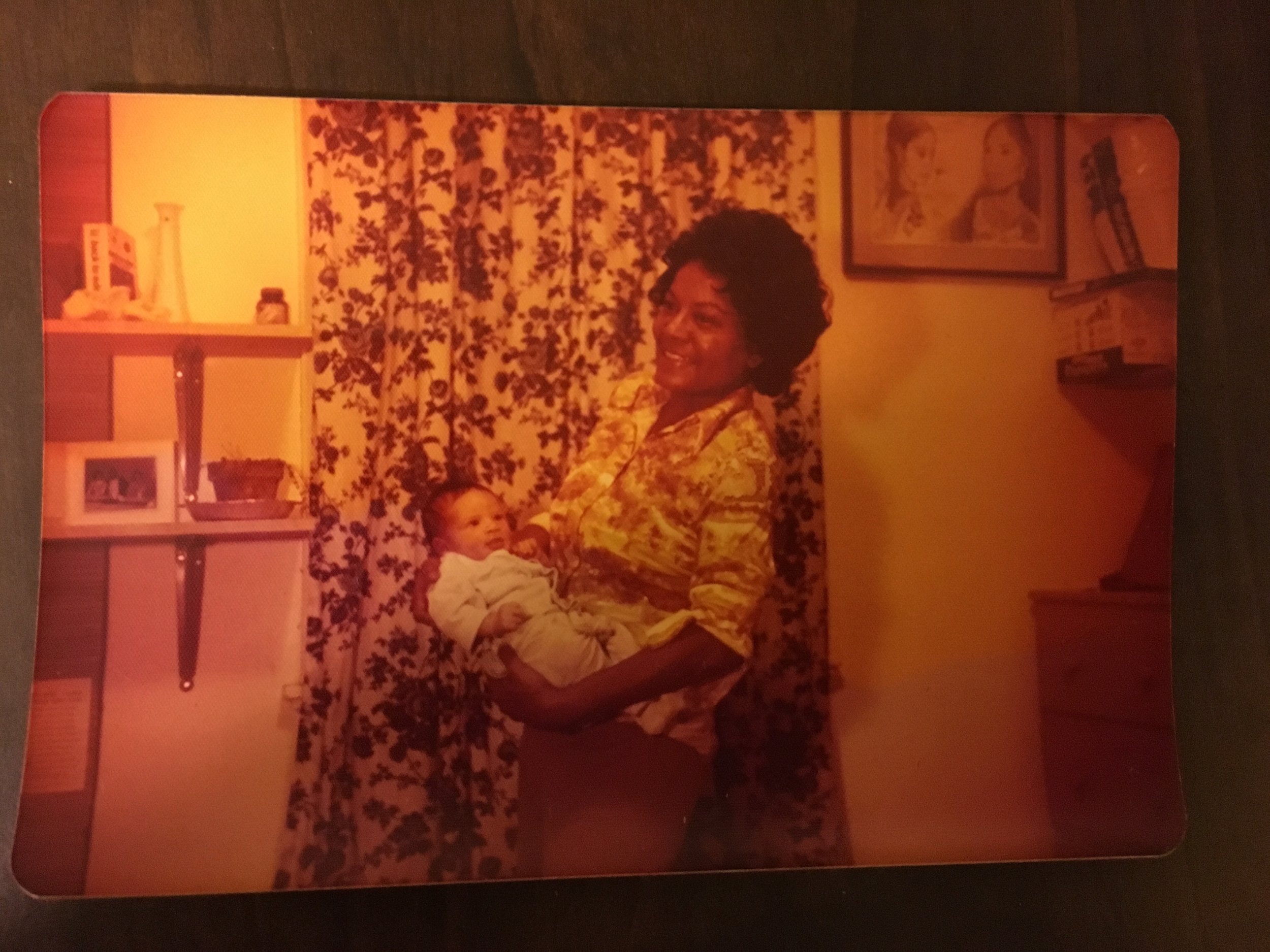 It was a big deal when my grandmother bought the land on Carver Road in the 1970s to build her dream home. It was a symbol of success for our family—that my grandmother had made it, moving from Williamson Street to the other side of Winston-Salem, where the middle-class black families lived.

But in 1991, when my grandmother moved to DC with us, my mother and I didn’t have a permanent address. I was twelve. My mother found a room for us for a month in Harvest House, an intentional community near Columbia Heights.

I walked for the first time through the foyer and the living room into the kitchen where my grandmother sat near a window in a rocking chair. She was unrecognizable, impossibly old and withered. Her left arm was bent inflexibly upward because of the stroke, the fingers of her left fist clenched tightly. She was sucking the nail on her left thumb, which was flat and wet.

She didn’t turn her head toward me, but stared straight ahead, unrecognizing. Five teeth, crooked and brown, stuck up in her mouth. I saw flashes of her red, raw gums, where her other teeth should have been, as she opened and closed her mouth, sucking at the air like an invisible lollipop. Her mouth reeked of decay.

“Hi, Grandma,” I repeated. I kissed her soft cheek. Her brown irises focused on me, but without seeing me. She mumbled and hummed softly under her breath, the gibberish a baby might make.

“What did she say?” I asked my mother, but she didn’t understand either. I felt suddenly old while my grandmother seemed young.

I helped my mother pull my grandmother to her feet, and we adjusted the pillow on her chair. My grandmother had open white sores on her bottom, where the skin had given way under the pressure of sitting.

“It’s important to change her position,” my mother explained. “So that the bedsores can heal.”

That evening, my grandmother shuffled slowly to the stairs — she could still walk some in those early days. My mother and I hooked our arms under her shoulders to aid her slow ascent to the second floor, where my mother, my grandmother, and I shared a room.

Sometimes we spent nights at Kirby’s in the Dorchester house, a 397-unit, nine-story apartment building. I loved the Dorchester House roof deck that overlooked the other Adams Morgan apartment buildings. I especially loved the roof in the evenings, when I swung my twelve-year-old legs over the edge to stare down at the prostitutes and loitering addicts in Malcolm X Park (renamed Meridian Hill after the neighborhood became desirable.)

Kirby asked after my grandmother, who was temporarily in a nursing home in Virginia, just outside DC. When we visited her she sat erect and clutched a ball in her left fist.

Kirby had a large plant with bright purple flowers and yellow stamen in his kitchen. “This plant owes itself to your grandmother’s wig,” he told me laughing. Kirby said my grandmother had sneaked a tendril from an African Violet back from a trip to Liberia. The customs agent supposedly told my grandmother to throw the plant away, but she had tucked a stem under her wig in the bathroom. Like my grandmother, Kirby put a clipping from the plant in water, until the roots sprouted and he could replant it.

Kirby told me that my grandmother had been the first on Williamson Street to buy a television. As a boy, he’d crowded into her living room with the other neighborhood kids to watch it. He said that if the living room was full, they’d watch through the window from the porch.

My mother and I took the elevator down two floors to visit Mal, another woman from North Carolina, who also lived in the Dorchester House. We listened through the door to the slow, scraping sound of Mal’s walker as she made her way to let us in. Then the next morning Mal dropped dead, and we moved into the dead woman’s apartment, on top of the dead woman’s things.

My mother moved my grandmother from the care facility into the apartment with us. We set up a hospital bed for my grandmother in the middle of the living room. The head and legs of the bed raised, making it easier to shift her about to prevent bed sores.

On Saturdays, when my mother was out, I braided cornrows in my grandmother’s hair, brittle and gray. I used enough pink oil hair lotion so that the comb easily parted it, without pulling or breaking. As I massaged her scalp, my grandmother moaned softly. I hope you get to die soon, I thought, not because I didn’t love my grandmother, my Grandma Baby, but precisely because I did. Her mind was gone, and all that remained was her big, baby body. I wanted her to be finally released from the prison of her flesh, to be restored to her dignity. I knew that was what I’d want in her position, what I wanted now, to be released.

The summer before I started boarding school in Vermont, my mother moved with my grandmother back to North Carolina.

My mother warned me that my grandmother’s boyfriend had trashed her retirement house on Carver Road. Still I wasn’t prepared for the damage, or the smell. My mother and I took photographs, documenting the evidence; debris everywhere, upturned and broken furniture, water logged cardboard boxes, papers and personal effects strewn over torn carpet. There were holes in the walls and shit, actual feces, in the middle of the living room floor.

Because the Carver Road house was uninhabitable, my mother, my grandmother, and I moved into my mother’s childhood home on Williamson Street. The front porch sagged. The paint peeled. Mosquitos congregated in the patch of concrete my mother called the backyard. I put on cut-off shorts, cleaned dead flies from the windowsills, and pulled weeds from the driveway.

Emogene lived across Williamson Street. My mother and I carried my grandmother down the steps and wheeled her across the street. Emogene shuffled at her stove frying, the underbelly of her arms jiggling as she flipped the golden brown chicken parts in the sizzling oil. My grandmother chewed at her fingers and rocked in her chair.

“Brenda’s back, like old times,” Emogene’s oldest daughter, Gloria, who was visiting, said. As children, my mother, Gloria and her four younger sisters had scampered around the neighborhood together. Emogene touched my grandmother’s hand. “Poor Ms. Cat,” she said, examining my grandmother’s loose gray cornrows. “She was always so fashionable. She and Brenda was always so well dressed.”

A picture of my grandmother, Catherine, emerged in sharp contrast to the wasted woman in the wheelchair. She’d been known for her fashion, was perfectly coiffed every time she stepped out of her house, hair styled, cinched waistline to show off her slender figure, lips painted. And she’d liked to entertain. Her parties were notorious.

People told me that my grandmother was quick witted and civilly engaged, a leader in the civil rights movement, who organized with the NAACP. Martin Luther King Junior himself had pulled into my grandmother’s driveway when he stopped in Winston-Salem.

I’d heard the story before from my mother. They’d held a meeting at my grandmother’s house on Williamson Street. Dr. King had kissed my teenage mother’s cheek, and she’d sworn to never wash her face again.

My grandmother also had grown up on Williamson Street, in a clapboard house with four older sisters (Johnny Mae, Rosa Lee, Ela Mae, and Clotee) and an older brother (Charlie). My grandmother, the youngest, graduated valedictorian of her high school and was the first in the family to go to college, Winston-Salem State.

At 22, she married Sylvester Humphrey, and they moved a block down Williamson Street, but they continued studying, eventually becoming teachers. My grandmother graduated from NYU School of Education with masters degrees in 1954, and my grandfather in 1953, I imagine some of the first black graduates in the program.

My cousins were various shades of brown, all darker than me. People said I had that good hair and pretty eyes, but I had no perception that I could pass in winter, or of how my wild, brown curls and my sometimes green, grey, or hazel eyes, and olive skin translated out of context. In black spaces, blackness was the default assumption and the norm. A girl was black unless her whiteness was named. “That white girl got new Jordans.” As children we learned to distrust white people. They were different.

Only later did I miss the simplicity of this rule. I was black. I didn’t doubt it, and there was an ease for me in these segregated spaces when I was young, where I benefited from the privilege of having lighter skin, but nobody questioned my belonging. We all knew that we aspired to live as well as the white people, to be like them. I wasn’t alone in identifying white as something desirable. Long, straight hair. The mother who followed you around with snacks. The white doctor father. Material comfort.

It was only after college that I realized my skin was so light. On the subway, a man said something nasty to me about black people. I should have put the man in his place, but I sat confused and then with growing comprehension that this man didn’t know that I was black. I was shocked, a fact which surprises people now, but I really didn’t have a clear sense of how others perceived me. This surprise, however, felt like a loss because until then I had experienced only the privileges of blackness, without realizing my privilege wasn’t every black person’s experience.

Excerpted from Girl in Motion: A Memoir

Jael Humphrey has worked in law firms, clerked for federal judges, and headed the police misconduct and criminal justice priority area at Lambda Legal. As a writer, she received the 2018 Pamela Krasney Moral Courage Fellowship, as well as residencies at Mesa Refuge, Wildacres, and Djerassi.