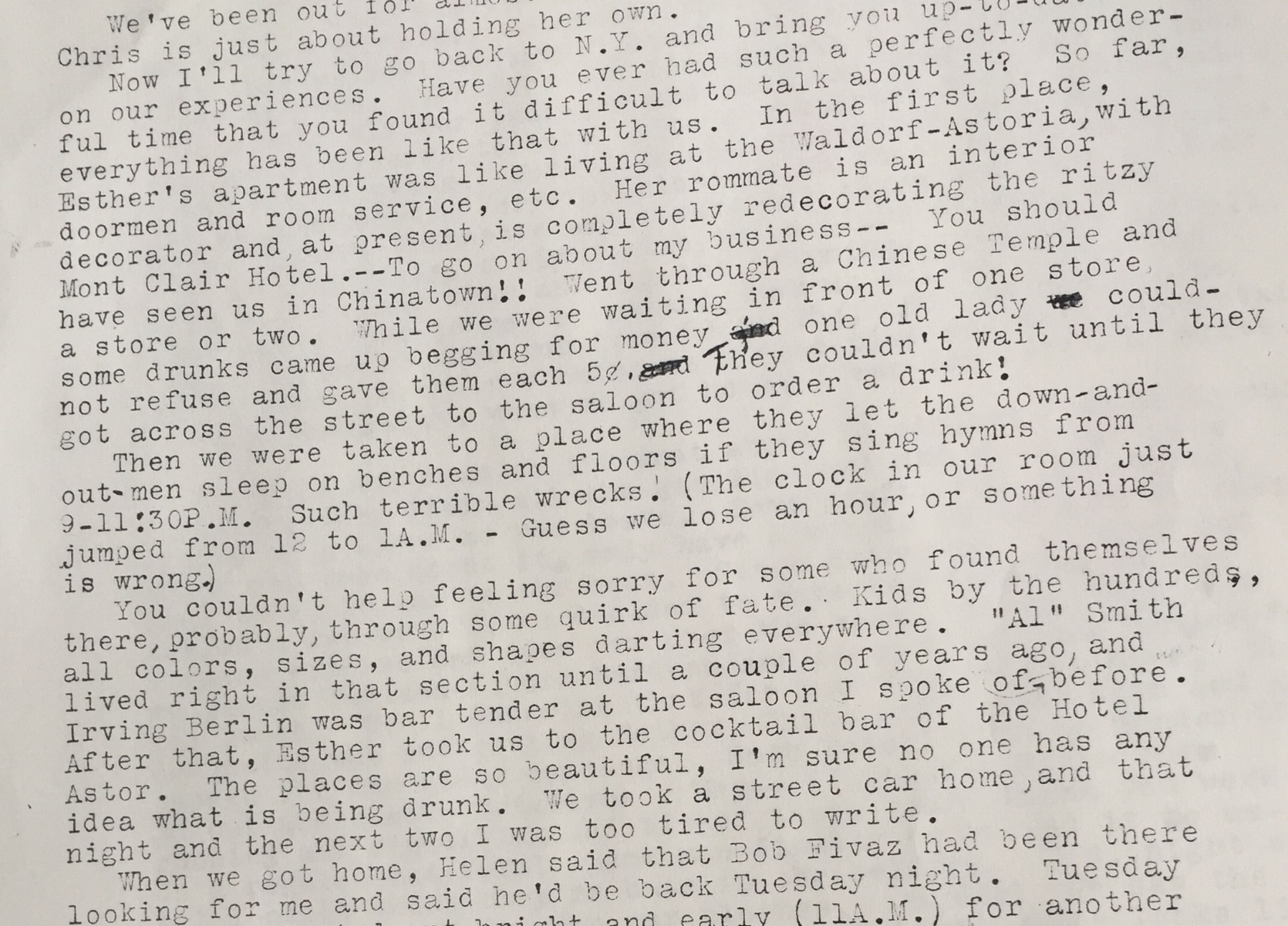 My great-aunt Florence (Florence Carey) was born in 1907 and died at 96 in 2003. She was never married and not an actual grandmother: she and her “partner,” Marie McBride, aka “Aunt Marie,” spent their lives together.

She lived in Ohio so we didn’t see her and Aunt Marie often, but we did correspond and I was able to visit her a few times during and after college. It wasn’t until then that I realized that Marie wasn’t actually our aunt (Marie died in the 1980s). I felt pretty silly not to have known.

Florence was one of those teachers that students never forget. At her memorial service, there were letters and cards from so many people remembering her influence on them as young people.

In addition to her induction into the Ashtabula County Basketball Foundation Hall of Fame (it’s really a thing!) and her local record for most points scored in a women’s game (52), she also travelled through Europe in 1936 and attended the Olympics where Jesse Owens won his medal.

I have some of her typed letters and diary from that journey. Florence and her traveling companions sailed from New York with their Plymouth convertible, aka “Pilly,” over to England, and from there they drove around Europe, ending up in Germany at the Olympics. They also drove through a town where Hitler was stopped, and heard Mussolini speak on the day the sanctions were lifted.

The letters themselves aren’t terribly dishy, but they are fun to read and an interesting insight into what a girls’ trip was like then. Lots of good vernacular.

Florence was an inspiration to me in college. She was always very supportive of my artistic endeavors and a definite role model for how to enjoy life.

What follows is an excerpt from Florence's letters home when she was traveling cross country to New York and on to Europe by ship in the spring and summer of 1936.

We’ve been out for almost 12 hrs already and going strong. Chris is just about holding her own.

Now I’ll try to go back to N.Y. and bring you up-to-date on our experiences. Have you ever had such a perfectly wonderful time that you found it difficult to talk about it? So far, everything has been like that for us. In the first place, Esther’s apartment was like living at the Waldorf-Astoria, with doormen and room service, etc. Her roommate is an interior decorator and at present is completely decorating the ritzy Mont Clair Hotel.—To go on about my business—You should have seen us in Chinatown!! Went through a Chinese Temple and a store or two. While we were waiting in front of one store some drunks came up begging for money. One old lady could not refuse and gave them each 5 cents. They couldn’t wait until they got across the street to the saloon to order a drink!

Then we were taken to a place where they let the down-and-out men sleep on benches and floors if they sing hymns from 9-11:30P.M. Such terrible wrecks. (The clock in our room just jumped from 12 to 1A.M. --Guess we lose an hour, or something is wrong.)

You couldn’t help feeling sorry for some who found themselves there, probably through some quirk of fate. Kids by the hundreds, all colors, sizes, and shapes darting everywhere. “Al” Smith lived right in that section until a couple of years ago, and Irving Berlin was bar tender at the saloon I spoke of before. After that, Esther took us to the cocktail bar of the Hotel Astor. The places are so beautiful. I’m sure no one has any idea what is being drunk. We took a street car home, and that night and the next two I was too tired to write.

When we got home, Helen said that Bob Fivaz had been there looking for me and said he’d be back Tuesday night. Tuesday morning we started out bright and early (11A.M.) for another hike. Remember that we have walked almost 10 miles each day.

You would have enjoyed our next trip through the N.B.C. broadcasting studios at Rockefeller City. We heard an orchestra practicing for the next day’s program and also saw a small, medium, and large studio for broadcasting. In the large one, Ed. Wynn’s program was in rehearsal. There is room for 1300 people to see and hear those forecasts. Incidentally, that’s Major Bowes’ room, too. For the speakers who aren’t accustomed to broadcasting, they have rooms entirely furnished like model homes with Colonial furniture, Georgian, and modernistic. Everything was so carefully explained that it kept us fascinated most of the morning. We never ate in the same place twice and each one was better than the one before.

Of course we had to take a bus and ride down Fifth Avenue. You know the buses are double-deckers and the top deck isn’t covered, so you can do a good job of “rubber-necking” at the sights.

We paid a $1.20 each to go to the top of the Empire State Bldg.—102 floors up. Just as we reached the top the guide said, “If you’ll look to your left you’ll see the “Ille de France” docking. Gosh! That’s the first time I really had a sinking feeling when I realized it was coming in for us. It’s a wonder we didn’t fall over the edge trying so hard to see the ship in one glance.

…Home with all our packages and just had time to get dressed when Bob Fivaz came to take us to his apartment for a cocktail. He has a cute place. More like our conception of a pent house than an apartment. Very futuristic with those split davenports. Chris, Esther, Jeanette, and I were all there and then he took us to the Deauville, a night club, for a $1.50 dinner, each. There was a floor show and all the trimmings; gigoloes and all. After the dinner he got a cab and took us all to a show and home. The shows here run from 50 to 75 cents, so you can see he didn’t spare money in showing us a good time and that we certainly had! Naturally, when we got home, I was too tired to write.

… While Jeanette was out getting Esther, Chris and I went down and got passes for the stock exchange. Such Nuts!! It’s no wonder they go out and shoot themselves. Why—If you could see the running and signaling and ticker tape, you’d think you were in a regular nut farm! Some man finally explained it to us—but I still think they’re bats in the belfry. Wed. night we spent washing and ironing our clothes. Oh, Yes! We saw the screen and stage show at Radio City. The Cleveland Palace looks like a junk yard compared to this place. It just made you stand in the lobby and gasp…

We’re all a-dither---we’ve just come from the Palazzo Venezia, where we were almost under Mussolini’s nose, listening to him address the Roman populace. You see, the sanctions were officially lifted, today, and all the flags were flying and a mob of thousands and thousands lined the square and streets to hear him and cheer him, and the three nosey individuals were right in the front ranks. Of course, that was the high light of the day, and again just our dumb luck that we happened to hear at 7:15 that he was going to speak, so we jumped on a bus and arrived just a few minutes before he came out on the balcony and spoke. He was much more pleasant than the news reels have shown him.

After breakfast we went to the American Express office to cash a letter of credit and I nearly kicked Chris’ leg off—because there, as big as life, was a huge picture of Ashtabula Harbor, on Lake Erie, U.S. Now, believe that!! It was a picture of Dock # 9. Stopped for mail again, and got another goose egg! We’ll soon be gone two months and write to you every night. There’s no use writing any more after you get this letter because we wouldn’t get it.

We’ve been touring Rome all day, seeing the old Roman city built on seven hills. Most everything you’ve heard of at one time or other, such as: Column of Marcus Aurelius, the Tiber River, and went over a bridge built in 40 B.C. and still used, the Colosseum, Roman Forum, Dome of St. Peter’s, House of the Vestal Virgins, Triumphal Arches, temples and statues galore, Pyramid, 8th century painting of the crucifixion, from Capitoline Hill all of Michelangelo’s designs, and so on, far into the night! This afternoon we went to the St. Cecilia church and Chris and I almost had to stay out. We had short sleeved dresses and our arms had to be all covered before we could go in. Some lady gave Chris her coat and I was going to stay outside but another lady insisted I go in, so she took off her scarf (green & yellow) and tied it over one arm and a fellow took his white handkerchief and pinned it over my other arm. By that time I was way behind the rest and when I did go in—Chris and Jeanette nearly went into hysterics when they did see me. Anyway, we got over our giggling by the time we were taken to the crypt to see the burial place of St. Ceclia. We also saw the place where M. Antony delivered his oration as well as Nero’s reception hall. It’s difficult to realize that they had elevators in those days B.C. but they did. Everything is being excavated and restored for a 2 yr. celebration of the 2,000 anniversary of Rome. There are many other places to be seen, such as St. Peter’s Church, the Vatican, and the Catacombs, but we are going to Naples tomorrow morning early to see Mt. Vesuvius, the blue grotto and the isle of Capri. If we have time, we’re going to the crater, too. Soldiers, soldiers, and more soldiers. Read a paper from home, today, that was printed the 12th of June, so the news was a little stale.

That brings you up-to-date- I guess.

Lauren McFarland is a mother to three wonderful boys, a ceramist and maker, a feminist, and a sometimes activist and runner living her best life in Brooklyn.