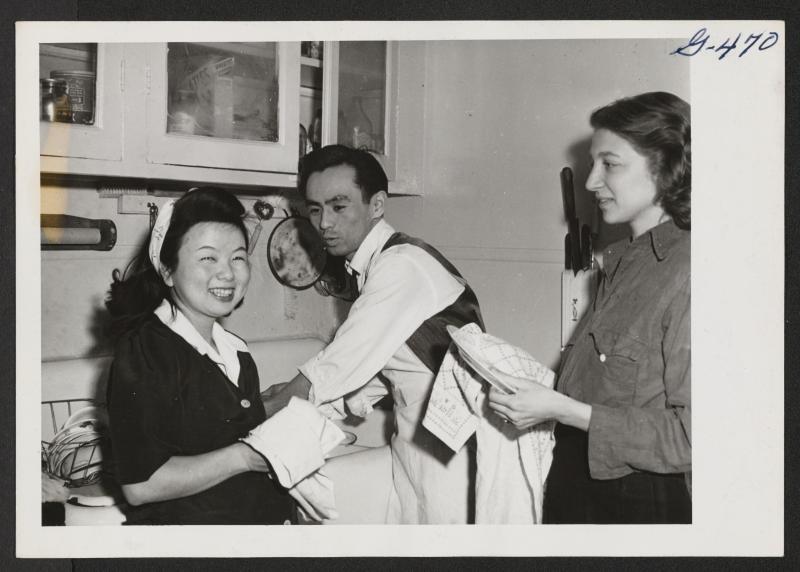 “Bell Tower for Hiroshima” is a song I wrote that recalls a story my father told me—how my grandmother’s family was on the other side of the mountain when the atomic bomb was dropped on Hiroshima seventy-five years ago. It’s ironic that Asami (her name) loved the United States, and even wrote a prize-winning essay ("Strangers' Rice," below) about her love for the country from within a Japanese-American prison camp.

As I write this from my retreat (I reject the word quarantine) in Brooklyn, I ask myself, why only now am I exploring the memory of grandmother, and this part of my history?

Maybe it’s because I’ve been going through the motions of accepting a very stark reality—that our interconnected global system is incredibly fragile. I’m reminded that the choices we make individually and collectively have dire consequences. I wonder if that country exemplifying freedom that my grandmother wrote about still exists, or ever existed.

The bombing of Hiroshima and Nagasaki utterly changed the world, and a new world was born instantaneously. We are currently transitioning into a new reality. When the world goes upside down, I believe it is the time to make personal revisions, and sustain a sense of righteous anger and distrust at the spell of normalcy that disguises the unacceptability of the status quo. With each passing day in this state of retreat, a feeling grows stronger within me—the feeling that humanity has entered an in-between space, wandering collectively in a desert without a map. Although it may provoke fear within me at times, there is also an intense curiosity. I humbly bow to the revelation that we don’t know where we will find ourselves after some journeying.

With this song, I’m asking everyone to embrace the uncertainty, to take pause and allow the inner silence to grow, so that the creative drive that is our birthright has space to emerge. We’re going to need it to support each other in cultivating this space.

Benny Oyama’s grandmother, Asami Kawachi, wrote this essay about her Californian childhood as a Nisei—a second-generation Japanese-American citizen—which won first place in the college division of the magazine Common Ground’s writing contest and was published in the summer of 1942. Kawachi was evacuated to Japanese-American internment camps in April of that year—first to Camp Santa Anita, where she married Joe Oyama, and then to the Jerome Relocation Center in Arkansas. The complete essay can be found here.

“Not until you have tasted the rice of strangers will you appreciate your home or your parents,” my Japanese mother used to tell us. We paid scant attention to her oft-repeated sayings. Being an Oriental she had a proverb for each admonition.

However, I have learned the wisdom of many of Mother’s words and recall them vividly when pressed by the vicissitudes of life. For all too soon, like an uninvited storm, I became an adult and encountered situations that would test my mother’s convictions about the tricks of the world…

My story begins with Father picking up the fragments of a rumor in the early 1900s, recounting the fabulous riches in California. As he dug around for a worm that would cure his gall stones, his mind’s eye stretched beyond the dingy Japanese countryside to one resplendent with the beauty of miles of orange groves—trees with gold on them, he put it… Lightly burdened with a single straw satchel, Father stepped aboard a ship bound for America and sailed to the legendary land.

Mother came over a year after and gave birth in the ensuing years to three Nisei, of whom I am the eldest. My parents became part of the American soil by taking up the plow under the temperate California sun. How we screamed with delight on those bumpy rides on the old mare as they tilled the field…

White schoolmates often laughed at my appearance—dresses that reached below my knees and hung like a gunny sack; shoes that advertised an intention for long wear by being a couple of sizes too large for my feet. But those years in Fresno, California, were crowded with adventure, sneaking off to the swimming hole, entertaining Mother and Father after our meals with songs they could not understand, surprising them on April Fool’s Day. At home we referred to table, hat, stove, lettuce, and other such objects in English, though my parents were never able to read or compose a sentence in English. When I was still in the second grade, Father expected me to decipher a bill of some sort. When I could not help him, he blared, “What do you go to school for!”

This otherwise tranquil life came to an end when Father was finally confined to a hospital. I was only seven, my sister five, when he died. One month later, the son for whom he had waited all his life was born. My mother could scarcely speak comprehensible English; she could not manage the twenty-acre farm herself. We all worked in neighboring fields for three years. But without Father our routine was broken. I was in the fourth grade and almost eleven years old when Mother, bewildered, picked up her brood and sailed back to her native land, promising us that within a year we should come back.

We reached a quaintly beautiful and mountainous country in Japan, strewn with narrow winding roads, and dotted with straw-thatched houses. Our bed was a mattress on the floor, easily accessible to the fleas. Was it a strange intuition that caused an eleven-year-old to cry for American in her sleep as I did?...

I bombarded my mother with plans of going back to the United States. At last she yielded. I could not trust my ears when she said I was to go to America in care of a friend. So sudden was the parting with my family that, as I stood on the train step, I felt a confusion of joy in returning to my own country at last, and yet, at the first drag of the train, an abyss of sorrow in leaving those closest to me.

I paid a price in returning. For, after the first radiant glimpse of San Pedro Harbor, the supposed “friend” laid bare an incredible plot before me. At thirteen and a half, a prearranged marriage awaited my arrival! “I will not submit to a marriage; I want an education, first and foremost!” I cried. This very unwomanly outburst cause a snag in the marriage plans. The sponsors tried to frighten me by picturing with pit blackness the cruelties one encounters in this land of strangers. “What will you do in case of illness?” they queried, not without kindness. “I would rather die,” I answered stubbornly, glaring at these men and women of my own race. So violent was my protest they were relieved to forget the marriage idea by placing me in a good American family to impregnate me with some feminine virtues, which I seemingly lacked.

So, through grammar and high school, three middle-class American families made a home for me…

Because of the opportunity for a broad education that this country offers, I feel myself a part of a whole, a humble molecule, to be sure. And that is part of the beauty and joy of proclaiming I am a citizen. A privilege, indeed, to know the tired Negro on the street car, the Mexican boy who was class president, the girl who sits laughingly beside me in a psychology class. They are my friends, because they too are a part of the United states.

My home and school life is a testimonial that racial prejudice is born from lack of understanding. On the few occasions I have faced discrimination, I have been able to smile—to revel in the knowledge that the unkindness shown only made me more appreciative of the educated tolerant people I have been privileged to know and live with. Thus I think my mother lost the essence of her saying—that we suffer at the hands of strangers. The rice, the bread I partook of with them, was bitter only in my intermittent loneliness. Instead of my mother’s conception of a harsh world, I really found a new and refreshing momentum to live.

In the last mail I received from Japan, Mother urged my immediate return to the family. I replied in effect that I could not leave now; I owed a debt to the families and the teachers who had inspired me, and I wished to imprint my share of toil on American earth. I did not, of course, imagine the catastrophic changes that were to follow this letter.

Now my mother, my sister, and my brother stand in hate against my country—hence against me. But so it was in the Revolutionary, Civil, and World Wars. It is not too hard to break spiritual links with my family, for I broke physical ties with them almost ten years ago. But I cannot help sympathizing with the Nisei’s parents here in America who are pointed out now with accusing fingers as enemy aliens. However, they, too, must bow in gratitude for past blessings and trust in a firm belief that acceptance will in the future be synonymous with America.

Personally my daily life has not been marred since the outbreak of war, even though my skin is yellow. Even strangers smile and start conversations on street cars, something that has not happened often before. This continued kindly courtesy cements my belief in the broader scope of an American’s mind. Substituting defense stamps for candies does not give vent to my restless spirit. I must act—but what can I undertake with my limited talents? To this question I am giving serious consideration. The instructors at school advise us to continue our education. Whatever I do, whether studying according to plan or serving in zones of danger, my service will be an expression of thankfulness for the privilege of being an American citizen.

Benny Oyama is a multicultural Japanese and Jewish singer-songwriter born and raised in New York City. His music has been likened to Nick Drake, Gaetano Veloso, and Simon and Garfunkel, with guitar work rooted in Brazilian and American Folk traditions. He is based in Brooklyn, NY.