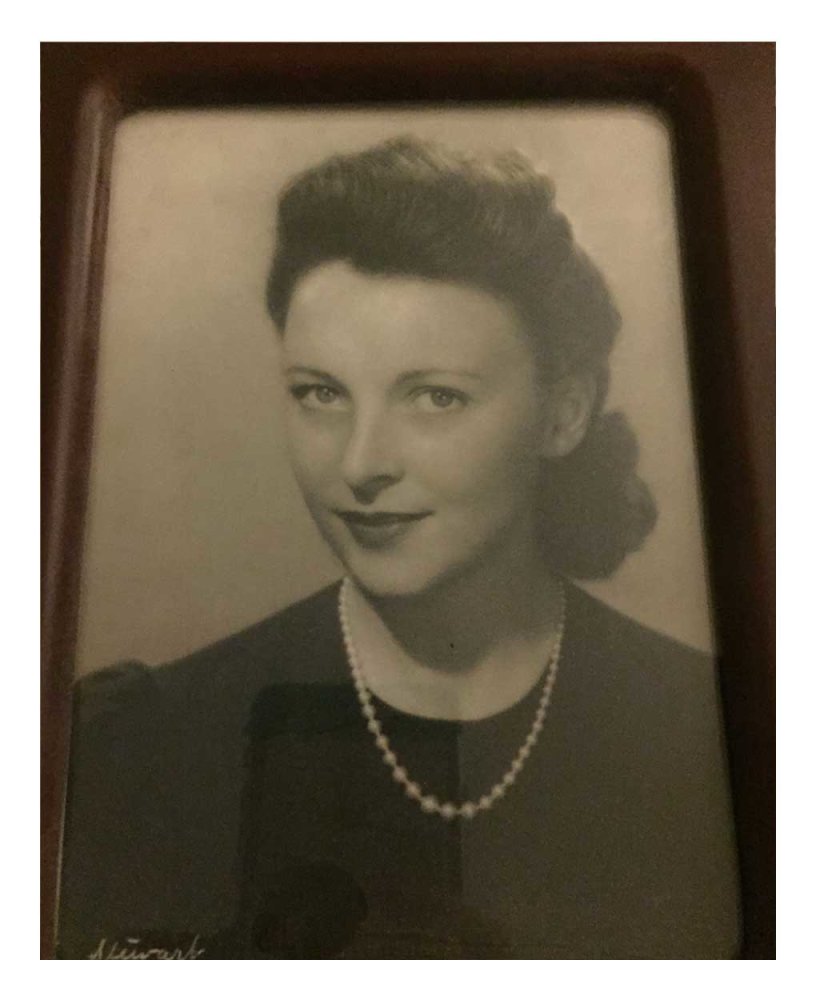 I never met my paternal grandmother, Estelle Doud. She was from New York of English descent and she married my Syrian grandfather sometime in the early 1940s. They lived in Jacksonville, FL, where there was a large Middle Eastern community in the first half of the 20th century.

When I was younger, I remember hearing stories about her death and the toll it had on my dad. He was 25 when she died and apparently cried for days. I was told that she was ill and in the hospital and was given an incorrect dosage of medicine, which killed her. I never questioned the story, but since my grandfather, father, uncle, aunt and a whole host of great uncles were doctors (or in medical school), looking back, it seems strange.

When I was younger, I was told I looked a lot like her. And I could tell that she was quite glamorous, as I was passed down her black, floor-length opera coat, which is gorgeous. My dad did talk about visiting New York when he was younger and about the billboard in Times Square that was advertising cigarettes and had real smoke coming out of it. My grandmother's New York background seemed glitzy and cosmopolitan.

As I got older, I heard other stories, more upsetting stories. I heard that she didn't get along with my favorite great aunt, Aunt Katherine, a warm, funny, Californian artist who married my granddad's brother, Ray. I always loved Aunt Katherine and couldn't understand how someone could not get along with her. Apparently, my grandmother was sort of a moody woman with a short fuse and hot temper. My dad's cousin told me he was scared of her when he was little.

Then, about seven years ago, we were having a Christmas gathering in our Brooklyn apartment with my cousins. Wine was flowing and I'm not sure how we got onto the topic of mental health—our family had a history of mental health issues (my grandfather used to get into funks and wouldn't get out of his rocking chair for days). But what I didn't know was that my grandmother had actually committed suicide. It was like a kick in the chest. Why had I never heard this before? Why had my dad never told me? I understand making up a story when I was younger, but when I was going through a tough time in college I talked to my dad about depression, but he never mentioned his mother.

To this day, I haven't asked him about her. I wish I had known her or could learn more about her. Knowing more now about depression and how restricted women's lives were in the first half of the 20th century, I imagine her as a woman trapped in an unhealthy mind, dealing with three small children and a husband she never saw (he worked a lot), and I can understand why she might have come across as unkind or irritable. God knows what dreams she was unable to fulfill.

But whoever she was and whatever her flaws, I still love her and wish I had met her.

Joey David Jovanovich is a documentary film and television producer working on projects ranging in subjects from history to science to travel. Among her credits are American Experience, NOVA Science Now, History Channel, BBC, National Geographic, and in 2017 she co-produced the Netflix Original Seeing Allred which made its premier at the Sundance Film Festival. She lives in Los Angeles with her husband and their two young children.